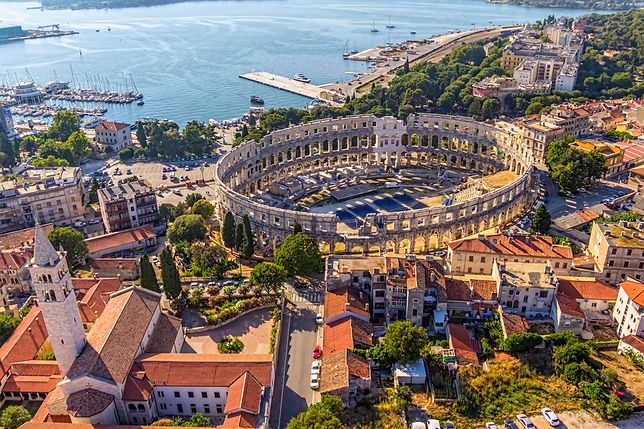 Most of Pula's monuments date back to Roman times – after subjugating Istria, the Romans transformed Pula into an administrative center, from which the peninsula was ruled. The seat of the rulers had to be representative, therefore the city was completely rebuilt. When in the first century. p.n.e. The Romans established their war camp here, Pula was already a town with a rich history.

Historians say, that the area of ​​today's city has been inhabited since the third millennium BC. If you believe the legend, The Argonauts founded the pool, participants of the expedition for the golden fleece. If you believe science, w V w. p.n.e. there was an Illyrian settlement on the hill, and the bay of Pula was the harbor of the nearby Nesactium, the Illyrian capital.

The Romans laid out the city, they called Pietas Julia, around the quadrilateral Forum. During the reign of Emperor Augustus, churches were erected at the Forum, amphitheater and other monumental buildings. Together with Trieste, Aquileia and Ravenna Pula was one of the most important Roman cities on the northern Adriatic. After the rise of Christianity and the arrival of its followers in Istria, it was the place of their execution. When the new religion came into force, w 425 r. the city was elevated to the rank of a bishopric. Half a century later, the Western Roman Empire collapsed, and there were barbarians in Pula. Better times came later, under the rule of Byzantium.

W 1150 r. Pula and Koper led the Anti-Venetian League, however, Venice gradually gained more and more influence in Istria. A turning point in the history of the city came in the year 1331, in which he "put himself under the protection" of recent enemies. Pula remained under the rule of Venice until the dissolution of the Venetian Republic in 1797 r.

The Congress of Vienna granted the badly run-down city to the Habsburgs. In the mid-nineteenth century. opportunities were appreciated, what the port gave. It was expanded, turning it into the monarchy's most important naval base. Pula also developed rapidly, counting at the turn of the century 50 thousand. residents. The official language was German. Liberated by the soldiers of Josip Broz-Tito, destroyed Pula became part of the Yugoslav state, and after its breakup – Croatia.

The pool was once surrounded by defensive walls, and it was possible to enter the city through one of the ten gates. The area protected by fortifications generally covered the area of ​​the present old town. The Romans built the amphitheater outside the then city. The defensive walls were pulled down in the 19th century.; only the fragments left between the Double Gate (entrance to the Archaeological Museum) a ul. Gardini.

The most important square of the city rebuilt by the Romans – religious and administrative center – there was a square Forum (right on the Riva street along the coast). They were laid out in the first century. p.n.e.

Forum – Also today, the city authorities reside at the Forum, and the square is the summer lounge of Pula. There are cafes and restaurants, concerts and other cultural events are organized. You can always meet tourists at the Forum, therefore, there is a tourist information office here (Forum 3, tel.052/ 219197).

At the turn of the millennium, the Romans built two twin churches at the Forum, one of which – temple of Augustus – it still stands on the northern side of the square (Augustov hram; tel.052/218689; pn.-pt. 9.00-13.30 i 18.00-21.00, sb. i nd. 9.30-13.30, in winter, upon prior telephone notification). Six 8-meter high columns with Corinthian capitals support the triangular pediment crowning the vestibule of the temple. It is raised by stone stairs. In its history, the building has been a place of pagan worship, Christian church, and even a grain store. Destroyed in 1944 r. the temple was reconstructed, and now you can see a collection of stone and bronze sculptures.

From the other Roman temple, dedicated event, only the rear wall built into the town council house has survived. Town hall (City Palace; County of Istria; Forum 1) was established in 1296 r. in the gothic style, but the facade and loggia date back to the 17th century. Old coats of arms and fragments of sculptures were embedded in the front wall of the building. The Diana gallery is located in the town hall (pn.-pt. 10.00-13.00 i 18.00-20.00, sb. 10.00-13.00).

Cathedral Near the Forum (access from the square at ul. Kandlerov) the cathedral rises (7.00-12.00 i 16.00-18.00), a large three-nave building with a basilica structure. The Romans built a temple of Jupiter on this site, replaced in the following centuries by the Christian Church. The present shape of the building was acquired in the 15th and 16th centuries. Early Christian floor mosaics from the turn of the 5th and 6th centuries have been preserved there., as well as a marble sarcophagus from the 3rd century, built into the altar. The belfry next to the church was built in the 17th century. from blocks obtained from the amphitheater. In summer, classical music concerts are organized in the cathedral.

Sergijevaca Street begins at the Forum, acting as a downtown promenade, on the site of an old Roman road. It leads to the Arch of Sergius. By leaving the Forum, and then taking the first street on the left, it comes to XIV–the eternal Franciscan monastery. In the church, presenting a Romanesque-Gothic mixture of styles, in summer, classical music concerts are held. The monastery houses part of the collection of stone sculptures from the Archaeological Museum and Istrian wall paintings.

At ul. Sergijevac can be viewed unveiled in 1959 r., well-preserved floor mosaics of a Roman villa from the 3rd century. It consists of them 40 fields with floral and geometric motifs. The central field is decorated with the mythological scene Punished by Dirke.
Turning from ul. Sergijevac in Maksymilianowa, you come to the Byzantine chapel of St.. Great Formosa (band of st. Maria Formosa; the. Flaciusova), one of the two chapels once belonging to the oldest basilica in Istria of the same invocation, erected for the Benedictines in the 6th century. and destroyed in the 16th century. There are mosaics in the chapel, which are now stored at the nearby Archaeological Museum.

Arch of Sergius – At the eastern end of the promenade stands the Arch of the Sergius (Arch of Sergius), high at approx. 8 m, built in the Corinthian order. She funded it in the years 27-29 p.n.e. Sage Posthumous Sergi, wanting to honor the three brothers in high office. The representative eastern side of the building, facing the city, was richly decorated; on the west side, the ornaments were much more modest. The Arch of Sergius once stood not far from the demolished village 1829 r. the main city gate, called Porta Aurea (Golden Gate), through which the Roman road Via Flavia ran from Aquileia and Trieste to the Forum in Pula.