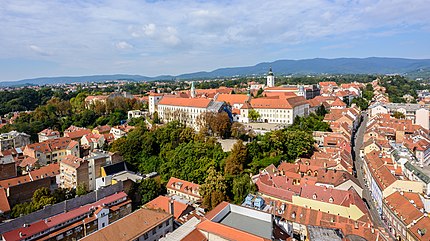 Zagreb and its surroundings

Zagreb (Zagreb) is the capital of Croatia since 1557 r. The city has over 1 million inhabitants. It is situated on both sides of the Sava River and the hills of the Medvednica Mountain. Zagreb developed from two twin settlements situated on the hills, they were called – Kaptol and Gradec. The seat of the clergy from 1094 r. was Kaptol, over which the towers of the cathedral of St.. Stefan, while Gradec focused around the church of St.. Brand, and it was mainly inhabited by craftsmen.

Both communes merged into one city only in the 19th century. Most of the medieval buildings of the city have survived to this day, while the impressive buildings from the nineteenth century., between the old town and the train station, have now become a shopping center. Both in the top, as well as the lower city there are many beautiful parks, galleries and museums.

For a long time the city was bypassed by hostilities accompanying the collapse of the former Yugoslavia, however, relative peace was shattered in May 1995 year, when rockets hit the city killing seven people. Today, the residents stroll along the Ilica River again and the cafes around Jelaćić Trog are full of the most diverse clientele.. However, many museums are still closed (part because of "reinterpretation”). Finding a reasonably priced accommodation in this peaceful and elegant city is still a real problem.

Around the train station (station) there are a number of parks and pavilions, and a little further you can see the twin, gothic towers of the cathedral. Jelacic Square, located north of the parks, is the main square of the city. Bus Station (bus station) there is Fr. 1 km east of the train station. Tram #3 runs between the bus station, railway station and Trg Jelaćić. Luggage storage at both stations is open 24 hours a day. In the luggage storage room at the bus station, payment is made on an hourly basis; the fee per night is 3 $. At the train station, you pay a fixed daily fee of approx. 1,50 $.

The administration of the Plitvice National Park runs an information office at Trgu Tomislava 19 (tel.442448), where you can learn about the possibilities of visiting the Park. The office also provides information on other national parks in Croatia.

Post and telecommunications – Any correspondence on poste restante is held by 1 a month at the post office on the eastern side of the train station. Zagreb is a convenient place to receive correspondence, because the poste restante office here is open 24 hours a day except Sunday morning. Letters should be addressed as follows: Remaining post office, 10 000 Zagreb, Republic of Croatia.

It is best to call abroad from the same post office.

Dali Travel travel agencies, Dezmanova 9 – branch of the Croatian Youth Hostel Society – provides information on youth hostels all over Croatia and makes reservation of places. You can also buy ISIC cards there (6 $). The agency is open Mon-Fri. 9.00-16.00.

Laundry – Predom at Draślcovica Street 31 is open during the week 7.00-19.00, and only in the mornings on Saturdays. Washing and ironing a jeans or shirt costs here 1 $, and washing underwear and socks -0,25 $ for art.

Medical assistance – If you need medical help, it is best to go to the modern Dom Zdravlja Centar health center (s273555), Runjaninova 4, near the Botanical Garden (codz. 7.00-20.00). Recently, the fee for a medical consultation was 6 $.

The police headquarters serving foreigners is located at Petrinjska 30.

Kaptol At the top of the stairs leading from Jelaćić Trog, there is the entrance to the colorful Dolac vegetable market, which stretches north along Opatovina. It takes place every day, but the biggest traffic is Friday and Saturday. Near the market there is the cathedral of St.. Stefan (with 1899 r.) with neo-gothic towers. Inside the church, you can see the remains of the first cathedral, which was built on this site in the Middle Ages, and it was destroyed by the earthquake of 1880 r. Preserved, among others. frescoes from the 13th century, renaissance pews, marble altars and a baroque pulpit. Near the cathedral there is a baroque archbishop's palace, and also from the 16th century. fortifications, built during the Turkish threat.

Gradec The pedestrianized Stube Ivan Zakmardija promenade leads from Radićeva Street to the Lotrscieak Tower and the cable car (with 1888 r.), connecting the lower and upper town. From the top of the tower (closed. nd.) there is a view of the city. On the right is the baroque church of St.. Catherine, behind which lies the Jesuit trg. Museum space (Jesuit Square 4; pn. Free entrance) is Zagreb's main gallery, where interesting art exhibitions are held. A little further to the north there is the Stone Gate from the 13th century., with the miraculous image of the Virgin Mary, who survived the fire of 1731 r.

In the center of Graz, at Markov trg, there is a Gothic church of St.. Brand. Inside the church you can admire the works of Ivan Meśtrović, the most famous contemporary Croatian sculptor. The building of the Croatian Parliament stands on the eastern side of the church – Taste (with 1908 r.).

West of the church of St.. Mark's Square, there is Bański Dvori Palace from the 18th century. As it is the seat of the president, the entrance gate is guarded by guards dressed in red uniforms.

Near, at Mletaćka Street 8, it houses the former studio of Meśtrović, now converted into a museum (sightseeing from. 8.00-15.00, by appointment only).

There are also in this area: Historical Museum of Croatia, Matośeva 9, Primitive Art Gallery, Cyril and Methodius 3 and the Natural History Museum, Demetrova 1 (all closed. pn.). The recently restored City Museum is very interesting, Opatićka 20, where you can see, among others. a mock-up of the old Gradec. The museum is located in the former convent of Poor Clares (with 1650 r.). The exhibits in each room are described in German and English.