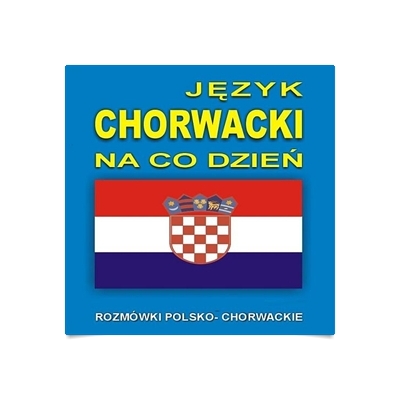 The language "Yugoslav”. Languages ​​were spoken in the territory of Yugoslavia: Slovenian, Macedonian and "Yugoslav" (Serbo-Croatian). In fact, it was entirely artificial, created from two separate languages: Croatian and Serbian (they differ e.g.. in terms of phonetics, morphology, lexis and word formation).

Croatian language. From the announcement in 1991 r. of independence, the official language of the country is Croatian. It belongs to the group of South Slavic languages.
Croatian ć is Polish part, ð (can be saved as dj) – Polish language, dź – dż, h – ch (voiceless), lj – l "medium language (no equivalent in Polish), nj – ń, s – sz,v -w, with – with. Croatian r corresponds to Polish, but e.g.. in the position between two consonants it is pronounced yes, as if it formed a syllable with a short y before it, e.g.. Hrvatska, we pronounce Chyrwatska, Krk - Church.

There is a moving accent in Croatian; in polysyllable words, it never falls on the last syllable. Croatian spelling is phonetic, that is, consistent with the pronunciation (it spells like this, how is it pronounced).

Foreign Languages. Tourism industry employees in Croatia (tourist information, hotels, restaurant) they almost always know – better or worse - German, English or Italian (spoken especially in Istria), and often single words and phrases in other languages, including in Polish. Eventually, with the good will of the interlocutors, in basic matters, you can speak the Polish-Croatian "dialect", helping each other with gestures. As the glossary below shows, many words sound similar in both languages.

welcome to the good side

please please or please (depending on the situation)

Where is? The clothes were there…?

Days of the week – week

Where can i buy? Where can I buy?

How much it costs? How much does it cost?

Croatian-Polish contacts. Croatia for a while (bound since 1102 r. with Hungary by a personal union) and Poland had common rulers. The first was Ludwik Węgierski (1370—1382) of the Andrew dynasty, ruler of a huge territory from Greater Poland to the Adriatic Sea. The second is Władysław Warneńczyk (1434-1444) from the Jagiellonian dynasty, who died in the battle with the Turks at Varna. Croats also fought in the troops of King Władysław. The figure of Queen Jadwiga can be found among the reliefs adorning the silver and gold sarcophagus of St.. Simon (sv. .Imun) z XIV w., which is located in the church of St.. Simon in Zadar. Poles and Croats also met during the Battle of Vienna - Croatian troops were among the troops allied with Poles.

The University of Zagreb has been cooperating with the Jagiellonian University for a long time (student exchange, scholarships). Croatian writer, Julije Beneśić, a linguist and translator of Polish literature (1883-1957), a graduate of the University of Krakow, after World War I, he was a Polish language teacher in Zagreb. In years 30. XX w. he worked as a lecturer in Serbo-Croatian at the University of Warsaw.

In Dubrovnik from 1926 r. until his death, the Polish composer Ludomir Michał Rogowski lived and worked, author of the anthem of Dubrovnik. There is a commemorative inscription devoted to him on the Benedictine monastery in Dubrovnik.

There are approx. 2500 Poles. The largest groups of the Polish diaspora live in Zagreb and its surroundings, Rijekę, Split, Osijek and the Istrian peninsula. The Polish Cultural Society "Nicolaus Copernicus" operates in Zagreb, and in Rijeka, the "Fryderyk Chopin" Cultural Society. Both organizations promote Polish culture and customs, cherish national traditions and holidays, and also cooperate with other associations of national minorities.